With extreme winter weather finally moving in, a closed Library makes it difficult to access the books and movies you want. But did you know that you can still access many of these materials through our downloadable media apps and sites?

With extreme winter weather finally moving in, a closed Library makes it difficult to access the books and movies you want. But did you know that you can still access many of these materials through our downloadable media apps and sites?

Read on for descriptions of and directs links to all of our downloadable materials.

*Live-brary.com hosts our large collection of downloadable e-books and audiobooks. You can install the Overdrive app on your mobile device to download materials for offline reading and listening. Visit the Help page for assistance with setting up your device.

*OneClickdigital provides access to exclusive Recorded Books eAudio titles, as well as other popular eBooks and eAudio titles. This collection includes bestselling and popular content for mobile and desktop platforms.

*Hoopla digital gives you 24/7 access to thousands of movies, television shows, music albums, eBooks, audiobooks, and comics on your smartphone, tablet, or computer.

*Flipster allows you to browse digital versions of your favorite magazines through any Internet browser or via the Flipster app for iPads running iOS 7.0 or higher and Android tablets 7″ or larger running Android version 4.2 or higher.

Make sure you have your up-to-date library card at hand to check out materials. With just a few clicks, you can download to your heart’s content!

Did you know? You can request e-book titles that are currently unavailable in Live-brary.com’s catalog with the mere click of a button! Live-brary will even put it on hold and check it out to you if they decide to purchase it.

Did you know? You can request e-book titles that are currently unavailable in Live-brary.com’s catalog with the mere click of a button! Live-brary will even put it on hold and check it out to you if they decide to purchase it.

Have you ever searched through Live-brary’s extensive catalog of e-books but still not found the title you’re looking for? With just a few button clicks, you can request the e-book you’re looking for. Follow these steps to make your request:

How to Request Unavailable E-books

1. Open the digital catalog at downloads.live-brary.com either in a browser on your computer or mobile device, or through the Overdrive app.

2. Search for your desired title or author in the search box on the top right. 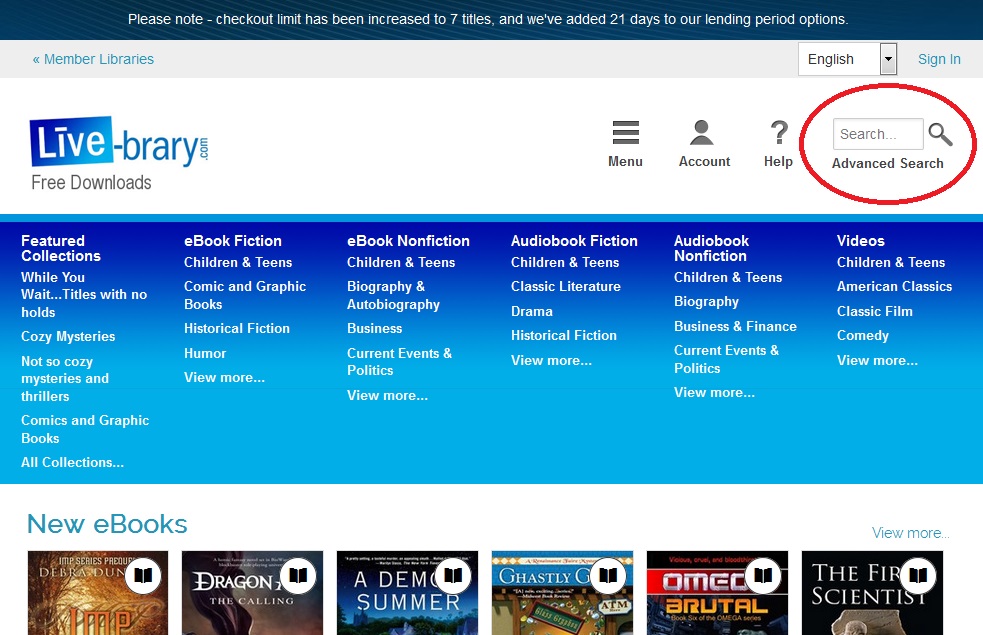 3. If what you’re looking for doesn’t appear, scroll to the bottom of the page and click on the blue button labeled “Add titles you can recommend.” 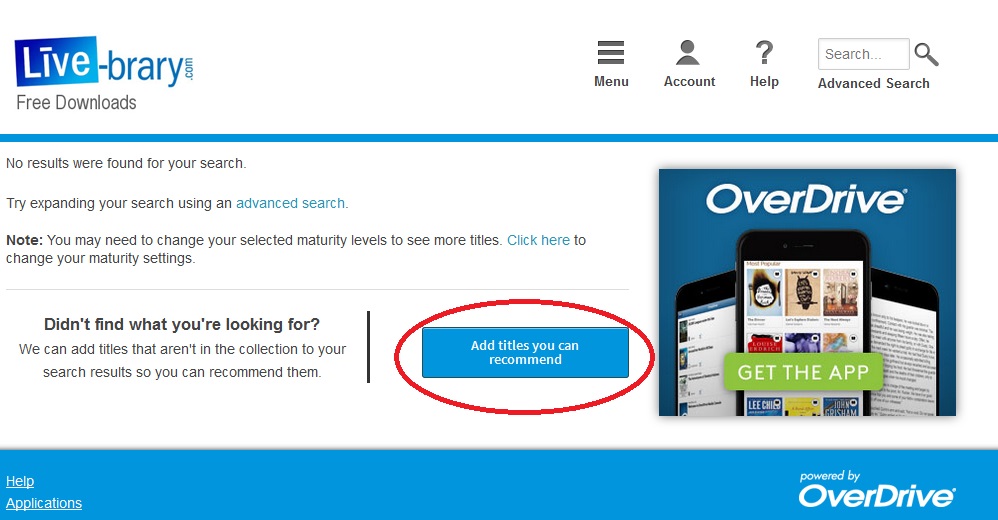 4. A selection of covers will appear according to your previous search terms. Scroll until you find your desired e-book, hover over the cover, and click the blue button labeled “Recommend.” 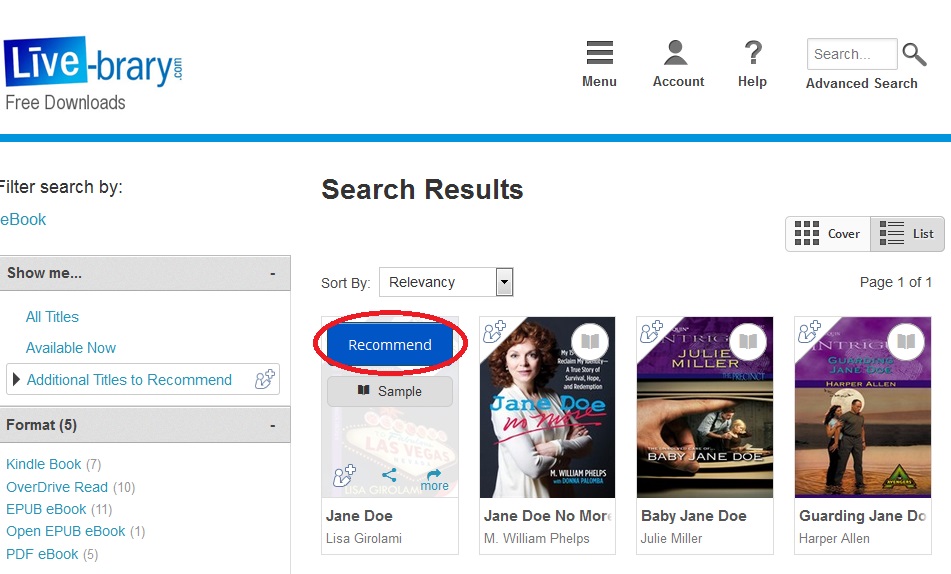 (Note: Not all unavailable e-books can be requested, as some titles are not made in the e-book format.)

5. Sign in with your library card barcode or username.

6. Choose whether or not you want the title to automatically be put on hold and checked out to you if it’s purchased.

7. All done! If the e-book is purchased, you will be emailed as soon as it’s available.

We have six new books on CD! Check out audiobooks for long car rides, or check out with the physical book to read along! Great for auditory learners.

We’ve had an explosion of new audiobooks in our Young Adult area! Whether you’re a teen or an adult,  check out these fascinating titles. The run time is listed for each audiobook, which is great if you know you have a reeaallly long car ride ahead of you!

Gaiman, Neil. The Graveyard Book. 2008. Read by the author. 7 CDs, 7 hours, 30 minutes.  If you have never heard Neil Gaiman speak before, just take this out immediately. Not only is he a fantastic writer, he is a phenomenal storyteller.

Hey everyone! The Teen Summer Reading Club has kicked off, and starting on Monday, you can come in and earn book bucks!

In case you dig audiobooks (and yes, they count – just find out how many pages the book has), SYNC is offering free audiobook downloads ALL SUMMER LONG. (You know who else offers free audiobooks? We do. Oh yeah).

SYNC YA Literature into Your Earphones

Teens and other readers of Young Adult Literature will have the opportunity to listen to bestselling titles and required reading classics this summer.   Each week  from June 23 – August 17, 2011, SYNC will offer two free audiobook downloads.

The audiobook pairings will include a popular YA title and a classic that connects with the YA title’s theme and is likely to show up on a student’s summer reading lists.  For example, Maggie Stiefvater’s Shiver, the first book in a popular series with strong allusions to Romeo & Juliet, will be paired with Shakespeare’s classic.

To find out when you can download titles to listen to on the run this summer, visit www.AudiobookSync.com or text syncya to 25827

There will be posters up all summer in the Young Adult Audiobook Area, along with bookmarks, about what book will be released when.

Have you ever used a Playaway before? It’s essentially an audiobook, but you don’t have to worry about CDs. We just received the following Playaways for the Young Adult collection.

Lord of the Flies by William Golding

The Hunger Games by Suzanne Collins

Loved it? Hated it? Have no idea *what* the librarian was thinking when she ordered (insert any title here)? Thought it was so funny that you then went out and read everything else by the author? Or … you really just want those community service hours?

Here’s the deal: starting on November 1st, you can ask a Youth Services librarian for a Book Review form. You can read the latest teen fiction and non-fiction (books must be from the YA section in the library, or could be found in the YA section of a library on Long Island.  The “latest” refers to books published from 2009 to present).

Read the book. Answer a few simple questions about the book (what’s it about, how awesome is it, what was your favorite {or least favorite} part). Then, bring your form back to the library and hand it in to a Youth Services librarian.  To make everyone happy, please PRINT your first and last name on your form.  If you hand in something without your name, you cannot earn community service.

If you’re waffling about what to read, either check out our New Books Friday and click on the title (and -gasp!- the publication year will reveal itself to you!) or ask Miss Kate about the newest YA titles.

Your Cold Spring Harbor Library card now gives you access to thousands of eBooks and audiobooks for adults, teens, and children!

Check to see if your portable device is compatible:

Get started browsing and downloading titles
:

I love books–the feel, the smell, the stories. Today’s NYT includes this report about the soaring sales of e-books on Amazon. Your library will be offering access to e-books for free in August  from our website (see link in right sidebar for download books) or directly from our online catalog.  These free e-books and e-audiobooks can be enjoyed on many devices  including the iPod, iPhone, Android phone, Sony E-reader, Nook, or Kobo,  but NOT a Kindle (due to Amazon’s exclusivity restrictions). Please check out this new service next month and let me know what you think of it. You can reach me anytime at hcrosson@cshlibrary.org. Thank you.

Starting August 1, you will be able to use your CSH library card to access thousands of e-books and e-audiobooks, as well as music and videos. Download to your own computer and a wide variety of compatible devices for listening/reading/watching in all settings.

For an overview and introduction to this service, watch this short, informative video.