September 27 to October 3 is Banned Books Week! Stand with the banned and celebrate your freedom to read by checking out a frequently banned and/or challenged book, whether one of the classics or a more recent title. 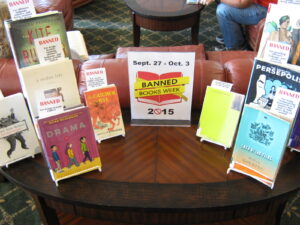 The Perks of Being a Wallflower by Stephen Chbosky

For more on Banned Books Week, check out this article by the Huffington Post.

Only a few days left to report on your summer reading! Need something to read? Check out our latest acquisitions to the teen collection.

July, July! Kick off this gloriously hot and lazy month with 60 new books – nonfiction, fiction, graphic novels, all sorts of awesome stuff. Remember, if you haven’t, sign up and participate in the Teen Summer Reading Club at the library!

It’s June! School is ALMOST OVER! CELEBRATE WITH THESE SHINY NEW BOOKS.

Also, if you click on a book cover, you’ll not only get the library record for the book, but for the e-book as well if it’s available. Cool, huh?

Don’t forget, our summer reading club starts on Monday, June 29th! Sign up in person at the library!

Want to earn some community service before the end of the school year? Don’t forget, our Teen Book Review program goes until MAY 31st – all of the books on this list are eligible! You can submit a review online here.

Awesome books to kick off your school year!

March is here! Spring is just around the corner, but snow is still on the ground. Here are some great new additions to the teen collection for you to enjoy.

Welcome to the graphic novel installment of our suggested summer reading for teens! Don’t let the recommended grades fool you – if you’re interested in a certain topic, you’re bound to love the book. The grade just refers to where it will fit nicely with the Common Core curriculum. And in case your parents argue that graphic novels aren’t “real” books – they definitely are. Also – don’t forget to check out our extensive graphic novel collection in the teen section of the library. Want a series that we don’t have? Ask Miss Kate, and she’ll do her best to get it on the shelves.

Abirached, Zeina. A game for swallows: to die, to leave, to return. 2012. 10th Grade
Living in the midst of civil war in Beirut, Lebanon, Zeina and her brother face an evening of apprehension when their parents do not return from a visit to the other side of the city.
Ties in with: 10th Grade English and Social Studies

Ottaviani, Jim. Feynman. 2011. 11th Grade
In this substantial graphic novel biography, First Second presents the larger-than-life exploits of Nobel-winning quantum physicist, adventurer, musician, world-class raconteur, and one of the greatest minds of the twentieth-century: Richard Feynman. Feynman tells the story of the great man’s life from his childhood in Long Island to his work on the Manhattan Project and the Challenger disaster. Ottaviani tackles the bad with the good, leaving you, the reader, delighted by Feynman’s exuberant life and staggered at the loss humanity suffered with his death.
Ties in with: 11th Grade English, Social Studies, Physics

Satrapi, Marjane. The complete Persepolis. 2007, c2004. 10th Grade
The great grand-daughter of Iran’s last emperor and the daughter of ardent Marxists describes growing up in Tehran in a country plagued by political upheaval and vast contradictions between public and private life.
Ties in with: 10th Grade English and Social Studies

Spiegelman, Art. Maus I: a survivor’s tale: my father bleeds history. 1986. AP European
A story of a Jewish survivor of Hitler’s Europe and his son, a cartoonist who tries to come to terms with his father’s story and history itself.
Ties in with: AP European History

Yakin, Boaz. Marathon. 2012. 10th Grade
The story of Eucles, the Athenian messenger who, in 490 BCE, ran twenty-seven miles from Sparta to Athens, preventing the fall of Greece to the Persian Empire.
Ties in with: English and Social Studies