Have you ever finished a book and then not known what you should read next, or how you should go about picking a title? Or wanted to find something similar to a novel you absolutely loved? Then you’re in luck, because the Novelist Plus database is a great readers’ advisory resource to help you with these exact situations.

Have you ever finished a book and then not known what you should read next, or how you should go about picking a title? Or wanted to find something similar to a novel you absolutely loved? Then you’re in luck, because the Novelist Plus database is a great readers’ advisory resource to help you with these exact situations.

In its own words, Novelist Plus is “a comprehensive readers’ advisory resource for fiction and nonfiction. With an intuitive interface and extensive proprietary content, NoveList Plus answers the question: What should I read next?” Once inside the database, you can enter a title into the search box and discover all sorts of information about it. In addition to a suggested list of similar titles you might like to read, Novelist also offers author read-alikes, published reviews of the book, and data such as genre, character, tone, writing style, and more. This tagged data is even linked, so that by clicking on something like “Genre: Adaptations, retellings, and spin-offs,” you will come up with a list of recommended books with this genre.

If you need assistance using the database, you can click the “Help” link at the top right of the screen for an extensive list of instructions. 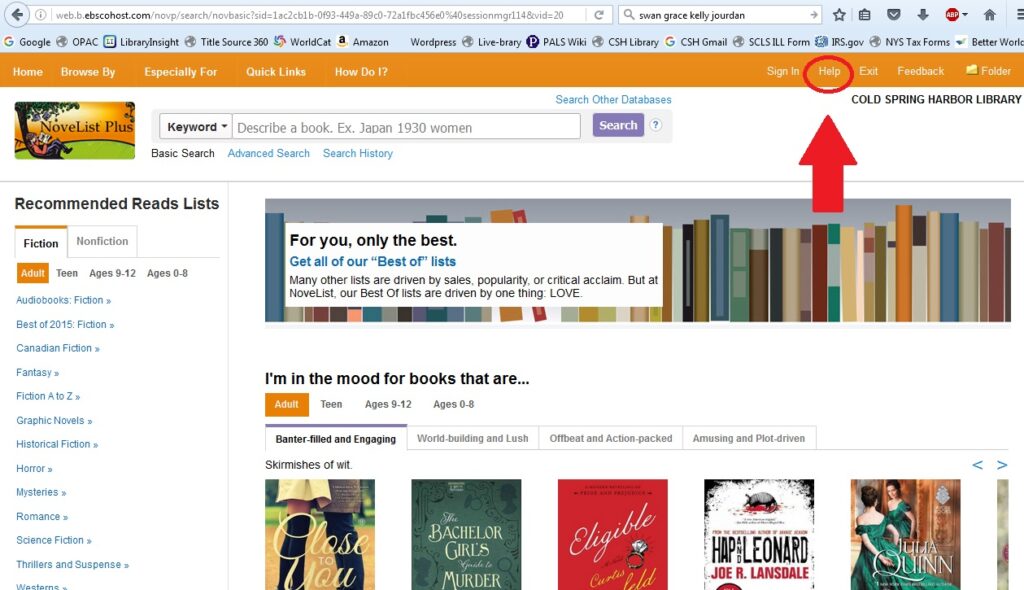 Bonus: Keep an eye out for our monthly “If you liked [this book], then try one of these [other books]” displays! Using recommendations from Novelist Plus, we create a poster with six read-alikes for a currently popular book and hang it in the lobby of the Library. For those on the go, we also post the list on our twitter and facebook pages!

April’s list is for Elena Ferrante’s “My Brilliant Friend”: 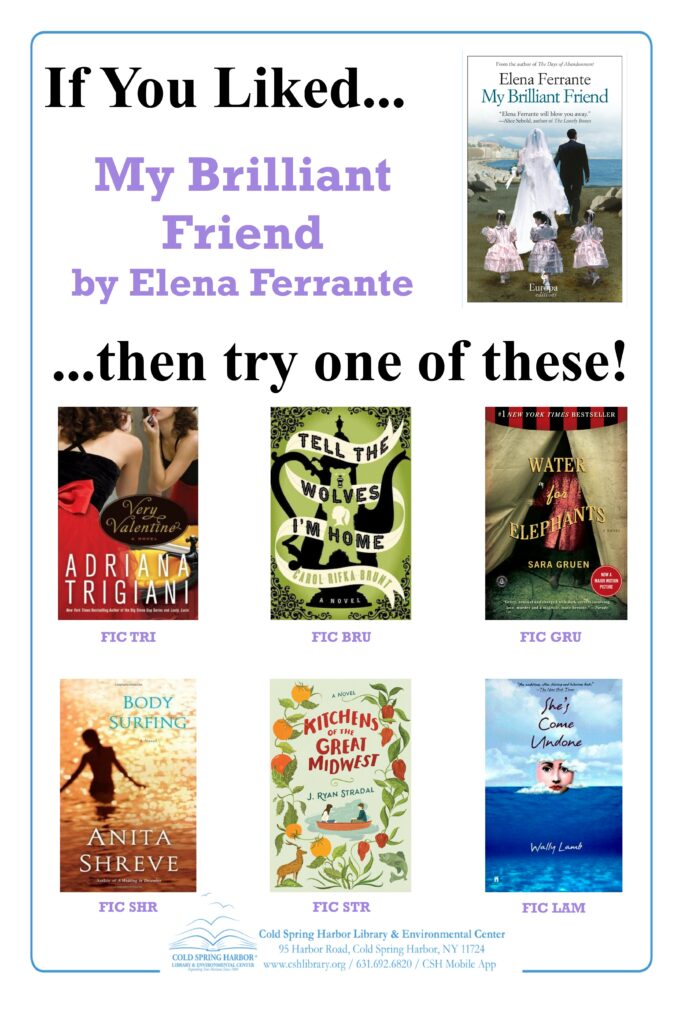 Thanks to our Read a Book Write a Review program this winter, we have a crop of fantastic book reviews. Are you interested in some science fiction, fantasy or a dystopic novel? Here are titles your peers reviewed.

[When Katniss and Peeta return] Katniss finds out she must return to the Hunger Games. All of the most recent victors must go. … Katniss must now face … a new, devastating truth. – Nicole, grade 8

I would rate this book a 5. Collins completely immerses the reader in this fantasy world. This is a great action book and keeps you reading. It is well written and fast moving. I would recommend it. – Robert, grade 12.

This book is about a brother and a sister who have magical powers. They are “WANTED” kids because their powers are so powerful and they want to change their society, back to normal. Their parents have been captured, and Wisty and Whit Allgood are on a journey to find them. Will “the One” stop them? I would rate this book a 5! The Gift is a great book and it is full of mysteries and magical surprises! – Lauren, grade 7

Sophie and Josh Newman have definite signs of being the silver and gold twins of the prophecy. Both are awakened and Sophie has learned the magics of fire and air. They set out with Nicholas Flamel to find someone to teach them the magic of water. Yet, the person they are looking for is quite insane. – Jacqueline, grade 8

This book is the story behind the video game Star Wars The Old Republic, as it tells the story of the events that sparked the war between the Jedi and the Sith. … It takes place millions of years before the Star Wars movies, when the  Old Republic strenuously existed with a Sith empire. .. The book contains many thrilling battles, which along [with] the mystery aspect make it a must read for any Star Wars fan. – Justin, grade 12

Congratulations to everyone who participated in our 2010-2011 Winter Read a Book Write a Review Program!  Twenty-five different teens reviewed over forty books, for a grand total of 172 volunteer hours.  Teens reviewed books that starred young adult protagonists, in genres from biography, realistic fiction, science fiction, historical fiction and humor. Below are just a few books reviewed by our teen reviewers.

Hamilton, Josh with Tim Keown. Beyond Belief: Finding the Strength to Come Back.

In this book, Hamilton talks about his childhood as a ballplayer and his early years in the minor leagues. He then explains how he got involved in drugs and missed several years of baseball due to his addiction … Hamilton is so honest about his life and it is humbling reading how one of the most talented athletes in the world succumbs to drug addiction. A great read for any baseball fan. – Sean, grade 11.

In the book the main character, Megan, is haunted by the ghost of her twin sister. She keeps this secret to herself until she meets a boy named Luke. He can see her sister too. The visions of her sister get worse as Megan must find out what she is trying to tell her. – Samantha, grade 9

Avery, an ordinary teenager, discovers that he has extraordinary superpowers, super strength and the ability to fly. Avery is recruited by a girl genius, Darla, to become a member of a team of teenagers with superpowers. Avery is also sought after by Cherchette, the villain of the story. … On a scale of one through five I would give this book a 4. I enjoyed reading an honest approach rather than the typical bemoaning of “woe is me, I have awesome powers, whatever will I do” that so often occurs in coming of age fantasy and magical realism protagonists. – Robert, grade 12

Forman, Gayle. If I Stay.

This book is about a girl who had a pretty great life, a loving family, a boyfriend, music, and college. Until one day her and her entire family get into a car accident. Her family is killed and she is left in critical condition. But it is her choice to make it she wants to live or die. – Samantha, grade 9

I really liked how large of a role music played in the book. Between her talent as a cellist, her boyfriend’s band, and her father’s old band, music provided some light in an otherwise sad book. – Kylie, grade 12